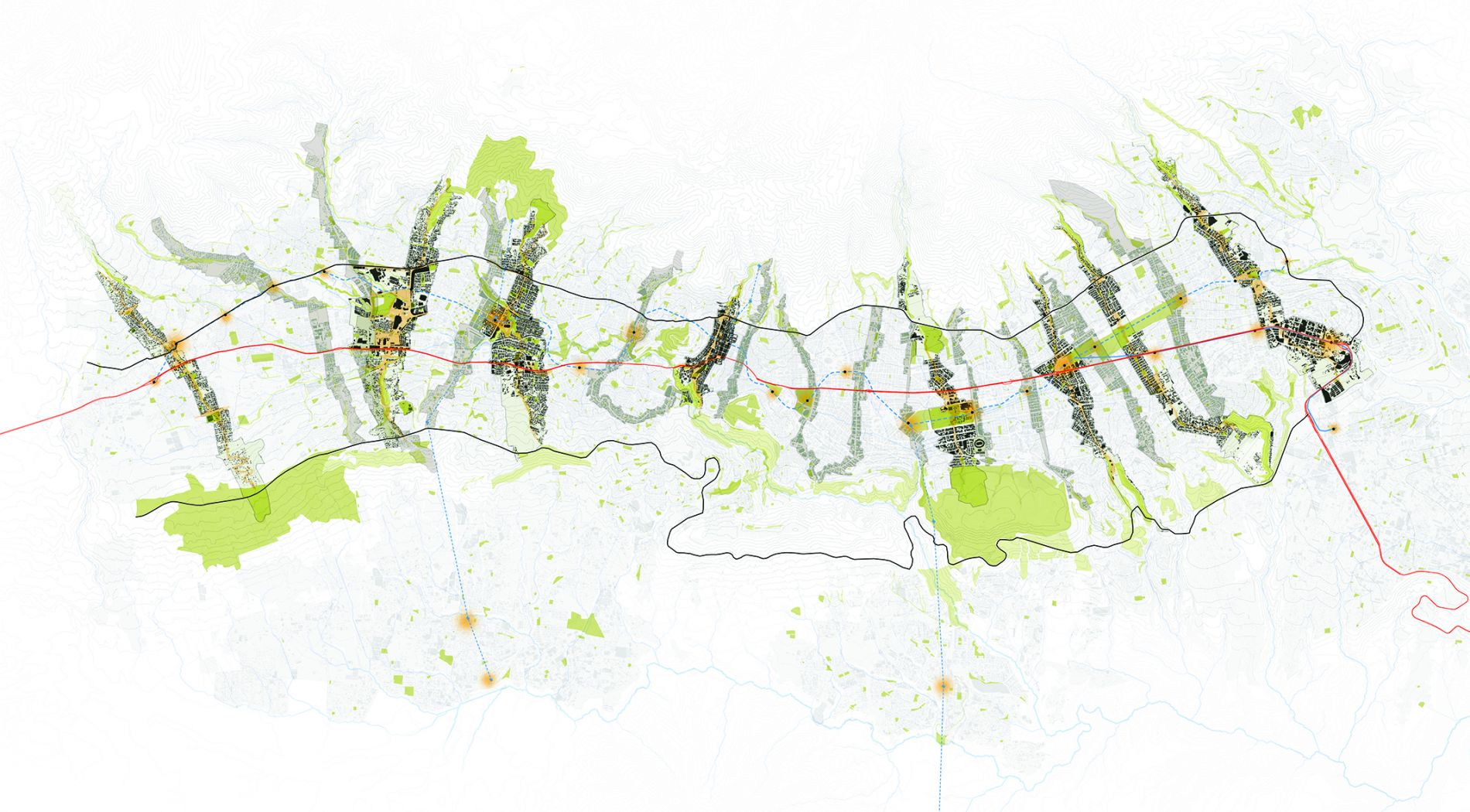 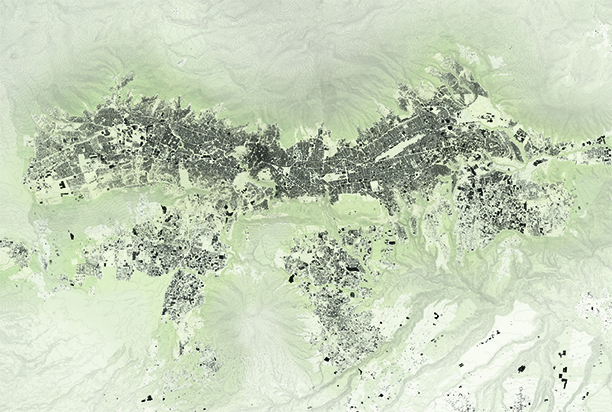 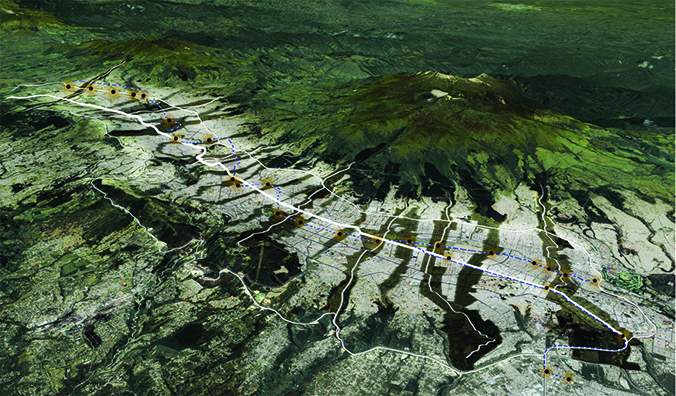 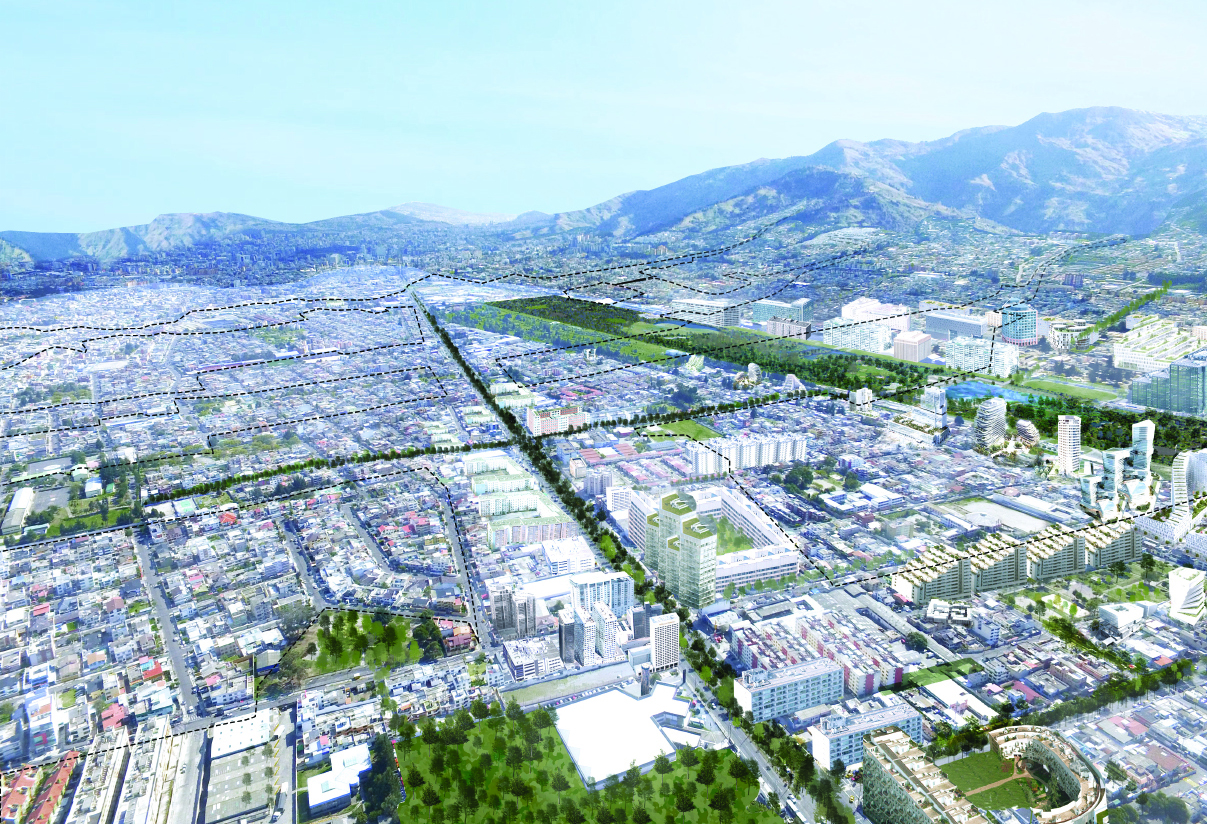 Proposal submitted to the International Competition for the Metropolitan Corridor of Quito.

The choice is not whether Quito will grow, but in what way. Faced with this challenge, it is clear that there is a division between what people value and what is actually built. Quito Transversal is the action of crossing and threading the city: the transversal as opposed to the tangential. Given the start of operations of the largest mobility project that the city has undertaken in its history, the Quito Metro, the proposal is a critical rethinking of circulation and movement flows throughout the city, and how these could contribute to the development of more sustainable and more ecological practices.

The objective is to describe how the different spaces of the city can intersect through bands that cross it from one extreme to another in a perpendicular way to their current understanding. Therefore, the strategy consists of fostering the articulation between the central and peripheral city through a different topology that introduces frames that allow permeability and proximity between the different parts, reinforcing the current and latent centralities (Metro stations), and creating new attractors capable of articulating the public and the private. The future city will have to face limited urban space and resources, so undertaking the preservation or conservation of the sense of place and continuously improving the existing urban environment are priorities. Therefore, the importance of the project is to underline why and where not to build to expand the potential of the public space: a civic and natural interior landscape open to all possibilities. Furthermore, it is desirable to aim for a moderate density that ensures the viability and vitality of production, consumption and public transport in pursuit of a healthier, safer and more sustainable quality of life.

The Longitudinal Metropolitan Corridor is the driving force behind the transversalities that emerge from it, forming a kind of networked city where it effectively balances the territory through the creation of polycentricity. Consequently, it improves social interaction, the mobility of the city and optimizes the travel times of its population.

From this perspective, QUITO CITY OF LIFE focuses on 3 main themes, which are developed as a priority in each of the proposed transversalities:

An urban environment in which the permanence of ecological processes is possible, where accessibility to basic services, cultural opportunities, respect for identity, inclusion and participation, respect for rights is guaranteed, in addition to being productive, allowing economic sufficiency and social justice. The focus of sustainability has to do with how to manage the exit from poverty, employment, access to water, food and nutrition, clean energy, the improvement of fast and non-polluting transport, the decrease of the ecological footprint, the limitation of the growth of the urban area, the reduction of the local contribution to climate change, the implementation of the circular economy and the generation of conditions for resilience.

It is one that cares about the physical, mental and social well-being of people and aspires to be an equitable and inclusive society. The healthy city constantly generates and improves the social and physical environments of the communities. In addition, it allows access to healthy produce from a vision of food sovereignty, waste management and low impact on water sources. A city with alternative mobility possibilities, which promotes the activation of the population  a goes beyond a sedentary lifestyle. A city that recognizes the importance of green infrastructure as a means of maintaining biodiversity and takes advantage of the benefits it generates on the physical and psychological health of people.

A city that makes intensive and efficient use of information technology in order to make decisions quickly and in a timely manner for the benefit of its inhabitants. It refers to the satisfaction of the needs of its residents from understanding them, adapting responses to their culture, conceiving permanent change and prioritizing their participation in development processes. A smart city has the ability to generate socioeconomic opportunities for its inhabitants, based on the real potential of its territory.